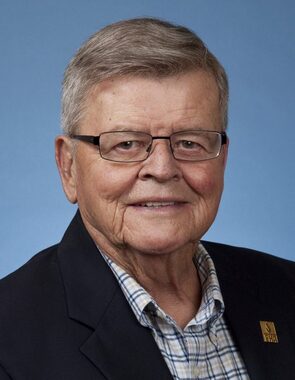 Back to Gerald's story

He leaves his wife of 60 years, Patricia (Berg) Paton; his son, Michael Paton, daughter-in-law, Mari Ann Paton and three grandchildren, Macy, William and Alexander Paton. He is preceded in death by his daughter, Julie (Paton) Hendry.

Born and raised in Arkansas City, Kansas, he was a longtime resident of Zionsville.

Jerry was a member of the founding Board of Trustees of the Pulmonary Hypertension Association. He became an emeritus member of the Board of Trustees in January 2008. Memorial contributions may be made to the Julie (Paton) Hendry Memorial Scholarship Fund of the Pulmonary Hypertension Association.
Published on January 8, 2020
To send flowers to the family of Gerald Paton, please visit Tribute Store.

Send flowers
in memory of Gerald

A place to share condolences and memories.
The guestbook expires on April 07, 2020.

Eleanor D’Amico
Dear Pat and family,
I’m so sorry for your loss. My deepest sympathies.
JOE AND CHERI MCKAMEY
PAT AND FAMILY,
WE ARE SO SAD OF THE PASSING OF JERRY!!! A GREAT HUSBAND TO YOU AND HIS FAMILY!!! MUCH LOVE,
JOE AND CHERI
View all